From Monday 28 November, the IBTS has introduced a system of assessing each donor’s eligibility to donate on a person-by-person basis in relation to sexual history and risk, rather than applying risks associated with specific populations which have previously excluded some potential donors.  This system is called Individual Donor Risk Assessment and is similar to the system that was introduced in the UK Blood Services in 2021.

Using a donor’s individual behaviours to determine if that person is eligible to give blood makes the process fairer and more inclusive, while maintaining the safety of the blood supply.  Every donor will be asked the same questions about their sexual activity, regardless of the donor’s gender or sexual orientation, or those of his/her partner.

The new questions on the health and lifestyle questionnaire which will be asked of all donors, concern every donor's sexual history in the last 4 months including questions about any new partners and type of sexual intercourse engaged in. Click here for more information.

There are eight blood groups and they are classified using two systems.

The first system is called the ABO System and it has four main groups:

The second system is called the Rhesus System and is classified as Rhesus Positive (+) and Rhesus Negative (-). The two systems combine to define the following of eight different blood groups of O-, O+, A-, A+, B-, B+, AB- and AB+. 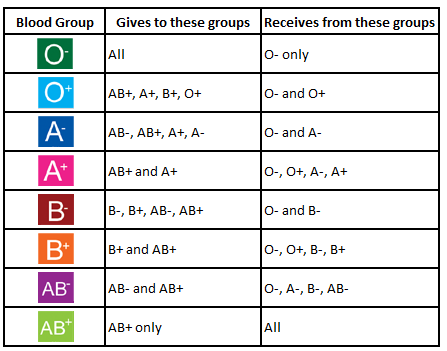 Blood group O Positive is the most common group in Ireland while AB negative is the least common. 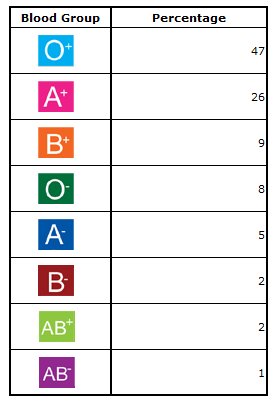